[Update] Now supports circle sprites. Also, Andreas Löw, the creator of PhysicsEditor will link to it with the next update of the editor. [/Update]

If you ever created a physics game, for example with my favorite game engine, AndEngine, and wanted to produce a polygonal body, you probably did something that sucked big time. Something like defining your vertices in code. This is

This is why we looked around and found the PhysicsEditor, a simple to use tool to create an output that describes physic definitions. While iOS integration seemed to work both from the editor into the code, it only provided an AndEngine Exporter-format, but no tool to integrate it back into the engine.
Until today.
We just published the (yet unofficial) AndEngine PhyisicsEditor Extension and the AndEngine PhysicsEditor Extension Examples.

Here is what it’s capable of:

How to use it

For this part I assume you already know the very basics of AndEngine development. Let’s start from the beginning.

First, download the PhysicsEditor. Open it and import your sprite of choice. I chose the star from the examples project: 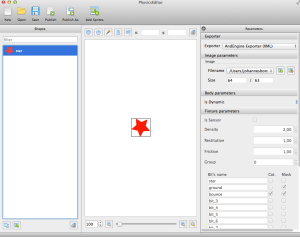 Now, draw your physical representation. You might want to use the Shape tracer for that (the wand icon): 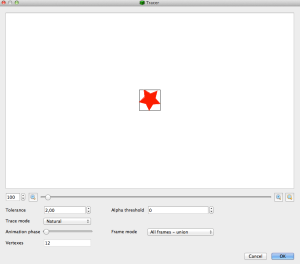 Now make your settings on the right 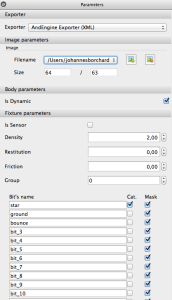 and push ‘publish as’. Save your XML somewhere.

Next, it’s time to get the source. Clone the repository using something like git clone git://github.com/ANDLABS-Git/AndEngine-PhysicsEditor-Extension.git. Import the source. Now, make sure you also have the AndEngine and the AndEnginePhysicsBox2DExtension in your workspace. You may have to update this dependencies.

There are some other use cases covered like drawing lines for debugging or loading multiple definitions, but that’s not more than about five keystrokes of additional work. You can take a look at the examples to see what I mean (in case you are curious).
It is possible to use the PhysicsEditor as a tool for level creation. In fact, it enables you to actually ‘draw’ your levels in your graphics tool of choice. Please keep in mind though that the maximum size of an IAreaShape in AndEngine is 2048 pixels, so you may want to use multiple sprites to achieve big levels. Also, memory is low on mobile devices, depending which device your are targeting, you maybe want to think about using a different method than this. 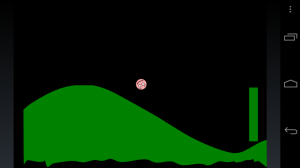 A ball jumping on a polygonal physical representation

Please keep in mind that this is a very early release that may still contain some bugs and needs some refactoring. Please feel free to leave any issue you discover in the project’s issue tracker.

So far, we have tested the four sample projects on the following devices:

Three days ago, madvertise, one of my favourite ad networks, updated its Android SDK in a major update to 2.0. So what changed and what’s new? Here is an overview over the major changes.

First of all, get the new SDK here.

How to make it work again: Renamed classes

When updating the new SDK, there are some minor changes a developer has to consider.

Also, the banner-type ‘iab’ has been renamed to ‘medium_rectangle’. However, at the moment ‘iab’ still works.
When you included all these changes, everything should work fine again.

The update of the SDK adressed some bugs many of you experienced. Here is an excerpt:

There are also some improvements where you have to do nothing to activate them:

And there are some new features you should think of when integrating the new SDK:

The new madvertise SDK comes with some nice new features and bug fixes. The new formats are suitable for tablets and phones with large screens like the Galaxy Nexus. I’m curious whether the animation banners and animation of new banners will lead to more clicks.

Please feel free to leave your thoughts and questions on the new update in the comments below.

How to combine Madvertise with another ad network

A lot of people asked me how I implement the switch of Madvertise to another ad network. Here is how I do it:

I’m doing this example using an AdMob and an Madvertise view. Of course you can use any other similar networks like Adwhirl or Mobclix as well but I’m assuming you are familiar with including the two SDKs you are using.

At first we need a layout resource, here it is:

Pretty basic. A Madvertise and an AdMob view. Next step: Get them in your Activity:

That’s easy too. Next, register an MadViewCallbackListener and switch the views the way you need it. As you have seen the MadView is invisible at the beginning. I assume that Madvertise always brings in more money, so when I receive an ad by them, I set the AdMob view to invisible and the MadView to visible. That’s essentially it:

Not a big deal. And that’s all. Now you have your own little meta ad network.

Please feel free to leave your experiences, questions or suggestions in the comments.