END_OF_DOCUMENT_TOKEN_TO_BE_REPLACED

Four reasons why your app wont be successful

Many developers produce tons of apps but still don’t earn much money. Others publish one or two apps and earn thousands of dollars every month. Why is that? Why are so many apps unsuccessful? Here are four reasons:

That’s obvious. If there is no need for your app, why should it be downloaded.

That’s a common error and its characteristics vary widely. I did that many times so I know what I’m talking about. Implementation means everything the user notizes (user experience, UX). This includes visual design and technical realization. Or in other words: If your app looks like the Android Market in it’s first iteration, it’s going to be hard.

The good news is: When your idea doesn’t suck but your implementation does, you can still change that. 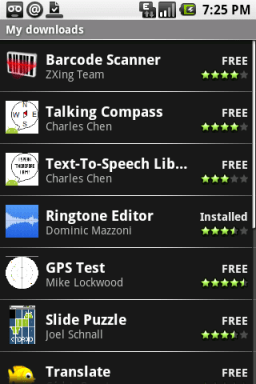 The first release of the Android Market looked terrible. If your app does too, you should change that.

3. You are not promoting

Many developers develop and after that, they develop again. That’s not enough. Someone has to do the marketing and promotion stuff and if there is no one else, you are that someone. Twitter, blog, facebook and talk in forums. There are 1035 blogs found on Technorati when searching for ‘Android’. E-mail all of them. Seriously? Seriously.

You like your idea, your friends do and maybe even your girlfriend (or boyfriend) does. You are excited and can’t wait to get the first update on the developer console. There it comes: 200 downloads on the first day… not to bad, but it wont bring you the expected millions. The next day will sure be better. 20 downloads. Hm.. Next day: 18. One week later: Total of 300 downloads has been reached, $o,45 has been made. Well, you’ll better focus on an other promising project.

While some apps are successful from the very beginning, most apps are not. Also Angry Birds was not. Once again: I’m totally serious on writing each of the 1035 blogs. Write 30-40 of them every day and you’ll be done in one month. You invested weeks on building your app, why stop when it’s finally done. I know, programming is fun, but getting great feedback of and contact to your users and future users is too.

In order to have a really successful app you must

“how long did it take, to get that number of downloads for your free apps? What kind of advertising/promotion did you consider? Have you advertised them? Would be interesting to read about the ascent of your downloads over time…”

I think this might be of general interest, so here are my answers.

I recorded the downloads of the AL Voice Recorder for five of months, here is the result: 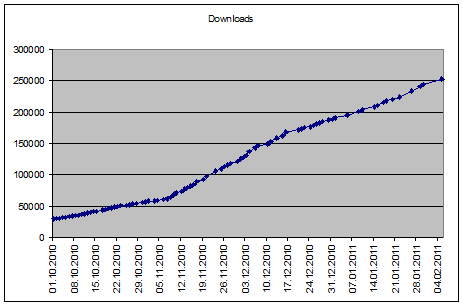 On 07th of November 2010 I made an App Store Optimization and the app was ranked #1 for the search query ‘voice recorder’ since then. You can see the huge increase in downloads on the chart.

My impression on advertising is that it is only usefull when you are able to spend enough money for being present for a longer period of time. This will sure have an effect on your download rates. Most developers spend $50 on their apps and then say “AdMob (normally it’s AdMob) burned my money!”. Of course you wont see big results when spending $50 for an ad campaign. Assume that one click costs $0.05 and the conversion rate is 10%, than that’s 100 new downloads for $50 (or $0.50 per download). I think advertisements in mobile ad networks are necessary as a part of huge ad campaigns, including social media presence, ASO, viral marketing and so on. When relying on ad networks only, the success will probably not be that sustainable.

I hope this was helpful, please feel free to leave comments.