Logging is one of the important tools for debugging an application.

When logging in Android, one usually writes code like

We need to add a tag and many times, in order to reproduce procedures, the name of the calling method. Not much of a deal, but since logging is done frequently it is often repeated

Since we don’t like repetitions, we decided to make it a little easier. Instead of the above, we now type

What we get is the calling class’s name and the line number as a tag, the calling methods name plus the formatted string as a message.

If you are interested in this type of logging, you can now git clone the ANDLABS Android Utils and add them as a library project.

What do you think? How do you use logging? Please share your thoughts in the comments.

Getting started with libgdx

This is a guest post by Alexander Fröhlich. Alexander is a freelance developer and is supporting ANDLABS at its libgdx-based development.

libgdx is an open source, Open GL based, cross platform game development framework. It’s supporting Web, Desktop, Android and iOS. This step by step introduction will teach you how to get started with the initial setup and your very first hello world in libgdx. Now we need to import these project into eclipse (other IDE provide similar options -> wiki)
NOTE: iOS projects have to be imported with XCode only (apple-mac) -> wiki You now should see four projects… YourGameName, YourGameName-Android, YourGameName-Desktop and YourGameName-html within eclipse’s package explorer. The first one being the core source project holding all your game logic and the latter being launcher projects holding only one starter class.

DESKTOP
Go to your newly imported desktop project and launch its Main.java (run as java application)
This should bring up this demo screen. As you can see libgdx already provides you with a small hello world application. ANDROID
Your eclipse android project should have been marked with a red x (eclipse way of telling you something is wrong with your setup).
Go to project properties (ALT-ENTER) and select your available Android-SDK-version..
NOTE: on versions prior to 4.0 you might have to remove the line

from your AndroidManifest.xml as this option being unsupported A dialogue will come up showing all connected devices and you may either want to push it on one of these or use the emulator (which will automatically start without any registered devices).
Make a choice and the game will be transfered on started on your device.

HTML5
A red cross over your project might mean that you have to install GWT.
After having GWT set up correctly, right-click on your HTML5-project and choose “Run as Web Application”.
Double click on the provided link ( e.g. http://127.0.0.1:8888/index.html?gwt.codesvr=127.0.0.1:9997)
A browser window will show up maybe requiring to install a GWT Developer Plugin
(Development Mode requires the Google Web Toolkit Developer Plugin).
If so, do restart the browser and you should see the libgdx logo screen.

Now you are up and ready to start building your own libgdx-based game. If you have any questions, please post them in the comments.

Forum: (most problems have been solved already.. just learn to query it wisely like the web :-)
http://www.badlogicgames.com/forum/

Introduction to AndEngine – Getting the code

In this series I will tell you how to use one of my favorite Android 2D Game Engines, AndEngine. We will go step by step through the processes, starting at simply getting the code, continuing with drawing sprites, using cameras, physics and so on.

AndEngine was started by Nicolas Gramlich as part of his Bachelor’s thesis in the beginning of 2010. It is an engine that provides lots of powerful features while hiding more advanced things like Open GL calls from the developer. It provides lots of extensions like a  Robotium extension, a Box2D extension, which is mostly written and maintained by badlogicgames‘ Mario Zechner for his libGDX-project, a SVG extension or a TMX tiled maps extension.

It has been used in various featured games like Greedy Spiders, Noogra Nuts or Zynga’s Dream Zoo.

At the very beginning you’ll need to download the most recent version of AndEngine. To do that, open your console, go to the directory of your choice and do a git clone of the engine by typing

That’s all. You now have a powerful game engine, ready to be used on your computer or mobile device.

Now here’s a story: When AndEngine was written, the author had to make a choice: did he want to write lots of useful code or lots of useful documentation? He chose the more fun part and that’s why AndEngine provides little to no documentation, which is one of its most frequent points of criticism. However, the source is all open, you can read it, change it, do whatever you like with it. There are the AndEngine forums and Nicolas tries to write the code in a way that it’s documenting itself.

In order to provide the developers an idea of what AndEngine can do, the AndEngine samples were created. You can get them by also cloning the git repository:

As you can now see there are a lot of dependencies to the different extensions. Go ahead and clone them:

Now you have a lot of code. Import them into your IDE of choice. Your workspace should now look something like this: 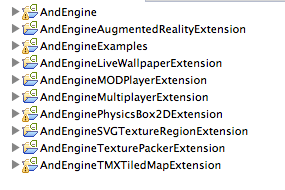 Let’s start a look at the examples. Connect your device or start an emulator with GPU emulation and run the AndEngineExamples on it. 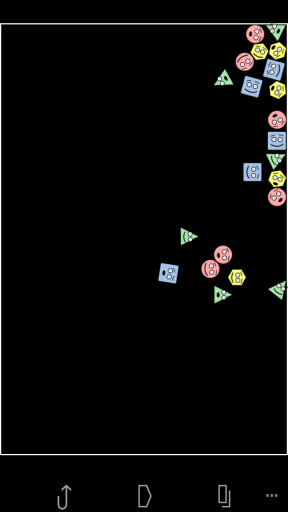 What you will find is an overview over AndEngine’s many features.

There are two important branches of AndEngine: The GLES2-branch and the GLES2-AnchorCenter branch. Since the latter will become the main branch soon, it is recommended to pull its code too. To do so, just go into each of your AndEngine-projects using your shell and execute

You might want to switch to this branch now by executing

Now take your time to play, take a look into the code and look forward to the next part of this series in which we will go through the basic parts of the engine.

If you are having problems compiling any of AndEngine’s code or issues cloning the repositories, please post a comment.

Did you ever enter a wrong password and got an AlertDialog telling you that you entered something wrong? You probably did and you probably also noticed that this alert dialog most likely takes one more click to continue, a click that could be saved. One way to avoid the AlertDialog are Toasts. Here are two nice but rarely used other ways to tell your users that they should enter something different.

Let’s assume we have an EditText which we use in our UI.
EditText mEditText ;
//...
mEditText  = (EditText ) findViewById(R.id.myEditText );

Furthermore we have a method showError() which we call when the EditText contains invalid data.

A nice way to show the user that, for example, an entered password was incorrect is to shake the EditText. Please note that I took this code from the official ApiDemos and modified it slightly.

First, we have to define our shake animation. Go to your res folder, create the subfolder anim and place a file shake.xml in it. In this file, create a translation like this:
< translate xmlns:android="http://schemas.android.com/apk/res/android" android:fromXDelta="0%" android:toXDelta="5%" android:duration="1000" android:interpolator="@anim/cycle_7" />

TranslateAnimations let us move views ond the x or y axis of our screen. Since we want to shake it from left to right, we only apply the translation on the x axis. We move it from zero percent of the view’s width to five percent of the view’s width and let the translation last one second (1000 ms). Furthermore, we use the interpolator cylce_7 wich is placed in anim/cycle_7.xml and looks like the following:
< cycleInterpolator xmlns:android="http://schemas.android.com/apk/res/android" android:cycles="7" />

It’s a simple CycleInterpolator. This kind of interpolators express the number of repetitions an animation should do. In our case, we repeat the animation seven times.

Now we only need to apply our shake animation to our EditText every time something incorrect is entered. We can do it like this:

That’s it. Super easy, super smooth integration into the UI.

This is my personal favourite. It is the setError()-method which comes out of the box with the EditText view. When calling this method, the right hand compount drawable of the will be set to the error icon. When the EditText also has focus, the text you gave to setError() will be shown in a popup. If you don’t like the default error icon, you can also use setError(CharSequence error, Drawable icon) to set your own icon. The routine to show errors can then look like this:

Which looks good, catches the user’s attention and doesn’t need any extra clicks to disappear.

Showing errors without interrupting the user flow can be accomplished easily on the Android plattform. For even more attention by the user, the two methods mentioned can also be combined.

Please feel free to share your methods of showing error messages in the comments.