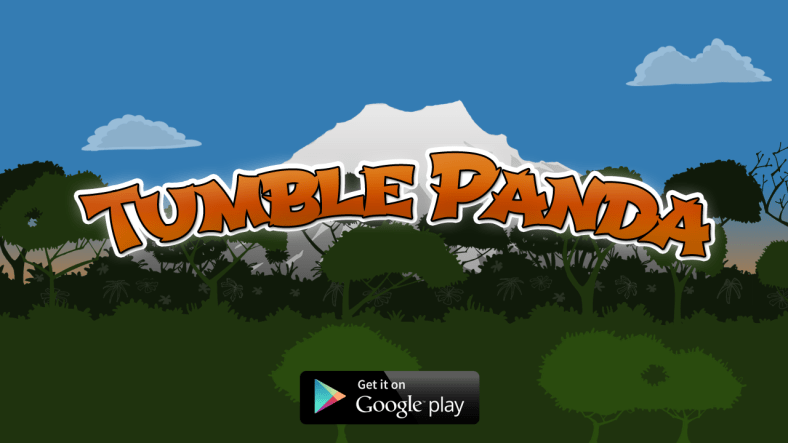 It is save to say I invested at least one man year in the development of Tumble Panda.

“I invested at least one man year in the development of Tumble Panda.”

A game that had a very simple concept in the beginning but gained complexity with progress and graphical design. I changed the way levels are edited until I finally ended up with a combination of Tiled and Inkscape for the design.

I used AndEngine as game engine and Box2D for physics. For skeleton animations, such as the Panda, the bamboo and trees we used Spine, which is available for $69 in the Essential edition.

A bamboo animated with spine

Graphical design was made by Subphisticated and background Illustrations by Darren Herminghaus, for an undisclosed medium four-digit amount.

Sound design was provided by my friend LeTryp, for the great price of $0.

Total cost of development: A medium four-digit amount plus $69 and a lot of time.

On this blog I wrote 6 articles about the game or specific areas of the game.

174 people became membery of the beta testing group on Google+.

Tumble Panda was published to Google Play on July 7th.

I published news about the release to 161 blogs, 23 Facebook groups, 52 Google+ groups and in 25 forums.

I sent a newsletter announcing the release to 429 subscribers.

I played around a bit with ad networks as well and spent $220 on AdMob and, after seeing almost no result, another $200 on AppBrain, which I much more very satisfied with. I also planned to spend about $3800 in advertising material which madvertise owes me, but they did not reply to my requests, which left me with an unsatisfied feeling.

Shortly after the release we announced TumblePanda.org and two weeks after the release, we published the first update with four new levels. Both of course was also communicated in the forums, on this blog and in another newsletter.

The release newsletter was actually opened by 24 people, the tumblepanda.org newsletter by 40 by.

The game was downloaded an additional 120 times in its first week. Today, it has been downloaded 2,002 times.

I didn’t become a millionaire with AdMob – yet

So, judging by download numbers and financial success, it is save to say that Tumble Panda was a failure.

Well, looking back a lot. Here are some of the points to give you an idea:

Still, I learned a lot. Let’s take a look.

To get some money I started working for clients again. Being a freelance Android engineer is an easy way of earning a generous amount of income and is what I am still doing at the moment.

I will be moving to Japan in July and therefore started a new blog, which you can take a look at on Japanese-Journey.com. If you are interested in Japanese culture, traveling or the Japanese language, take a look. Right now I’m writing two articles per week, one on a random topic and one Japanese Challenge. My goal is to grow it to 10,000 views per month (at the moment it is at about 2,000 views/month).

I also have a plan for this blog. I want to re-develop one of my existing apps from scratch. What I’m planning to do is involve you in every part of the project development process. Starting from competitor analysis, over selecting features, monetization, architecture and development. Marketing strategies and their implementation, product launch, update strategies and financial results.